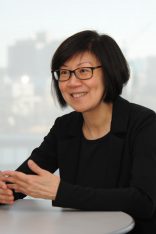 Diana Khor received her M.A. and Ph.D. in Sociology from Stanford University, having completed a dissertation entitled “The Incorporation of Women into the Public Sphere: An Inquiry into the Cross-national Patterns, Antecedents and Consequences.” Before pursuing graduate work in the United States, she wrote an M.Phil. thesis on “Employed Women in Hong Kong: Their Class and Gender Imageries”, and completed her undergraduate education in sociology, both at the University of Hong Kong. Born and educated in British colonial Hong Kong, Diana Khor developed a sensitivity early on in her academic career to issues related to gender, class, race and colonialism.

Gender has been Professor Khor’s principle research interest. She has worked on a diversity of projects related to gender, including feminist grassroots activism in Japan, the construction of knowledge in Women’s/Gender Studies, and gender research in sociology. In recent years, she has conducted research in the field of sexuality, focusing primarily on same-sex partnerships and family relationships. Working with overseas collaborators, she completed a project on marriage equality in Hong Kong, Taiwan and Japan. She is working on a book based on a project exploring how heteronormativity and gender norms are reinforced or challenged in the practices of intimacy of mothers and adult heterosexual and non-heterosexual daughters. At the same time, she is also the principal investigator of a new project on same-sex partnership and kin relations in Hong Kong and Japan. Through her research and writing, Diana Khor is committed to engaging with, while at the same time decentering universalized knowledge of gender and sexuality produced in the context of “the West”, and developing theories and concepts based on Asian experiences.