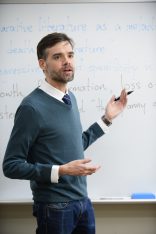 After receiving undergraduate degrees in Computer Science and English Literature (2007) at Clemson University in the United States, Gregory Khezrnejat worked as an ESL instructor and translator in Kyoto and Nagoya before entering Doshisha University as a MEXT Scholar. There, he received an M.A. (2013) and Ph.D. (2017) in Japanese Literature, completing a dissertation entitled “Tanizaki Jun’ichiro’s Melting Pot: Transnational Aesthetics in Taisho and Early Showa Era Works.” He has previously taught at Kansai University and Kyoto Seika University, and served as an assistant professor at Aoyama Gakuin University.

Professor Khezrnejat is primarily interested in transnational elements of modern and contemporary Japanese literature. His doctoral research focused on the novelist Tanizaki Jun’ichiro, examining how the author’s reputed traditional aesthetics can be read as an extension of his interest in linguistic and cultural hybridity. Other areas of interest include comparative literature, translation, postcolonial theory, canon formation, and the broader relationship between literature and the modern nation-state. Currently, he is focused on minority authorship in Japanese literature, exploring how the act of composing fiction and personal essays in a second language establishes a space for the creation and negotiation of transnational identities while forcing a critical reevaluation of the ethno-nationalist framework that underpins traditional nation-state canons.

・“The Introduction of In’ei Raisan and Tade Kuu Mushi in America: English Translations of Tanizaki Jun’ichiro and the Criteria of ‘Japanese Literature’” (Doshisha Kokubungaku 82, pp. 104-116, 2015.03)