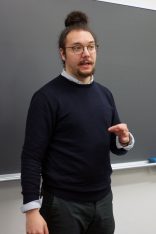 Stevie Suan holds a Doctorate in Manga Studies from the Graduate School of Manga Studies at Kyoto Seika University. He received his M.A. in Asian Studies from the University of Hawai‛i at Mānoa and a B.A. in Cinema and Cultural Studies at Stony Brook University. Born in Sri Lanka, but raised in New York City, Stevie has spent considerable time living and travelling within Asia, where he has studied and researched a wide variety of topics relating to the arts and media, ranging from traditional theatrical performance to contemporary media.

Conceptualizing the dynamics of performance modes has been one of the principle interests that have guided Dr. Suan’s research across different fields. Having engaged with various different mediums, he has had a sustained interest in Asia theater, producing a master’s thesis on gender and aesthetics in medieval Noh performance theory. Moving towards philosophical theories of performativity, Dr. Suan has since focused his research on contemporary media. In particular, his area of expertise is in anime (and manga), and how we can use aesthetics as a method to explore the dynamics of globalization through anime, in particular its transnational production. In his recent research he has been developing an approach that uses performance theory and media theory to approach issues of area studies (Japan studies and Asian studies), using anime as a prime example of the shifting currents of cultural production and consumption in our moment of globalization.

・“Anime’s Performativity: Diversity through Conventionality in a Global Media-Form.” Animation: an interdisciplinary journal. 12 (1), 2017: 62-79.